in Black Politics
Reading Time: 6min read
A A

The race for St. Petersburg Mayor is getting dirty.

Grab Him Up, Take Him to the River: Inside a KKK Murder Plot | New York News

To Welch supporters, the claims are not only absurd, they’re steeped in hypocrisy.

One side of the flyer, paid for by Rice’s political committee, Friends of Darden Rice, includes a campaign slogan — “Making St. Pete Better for All.” It then lists three reasons to cast a ballot for Rice: progressive values, proven results and looking out for all of us.

That side of the flyer is all positive. It says that Rice will ensure “workers are paid for the work they’ve done,” lead the fight for LGBTQ rights, protect “a woman’s right to make her own health care decisions,” and to protect the environment.

Rice’s record as an elected official, and as a community activist before she was elected, support the promises.

But it’s the other side of the flyer that gets dicey. 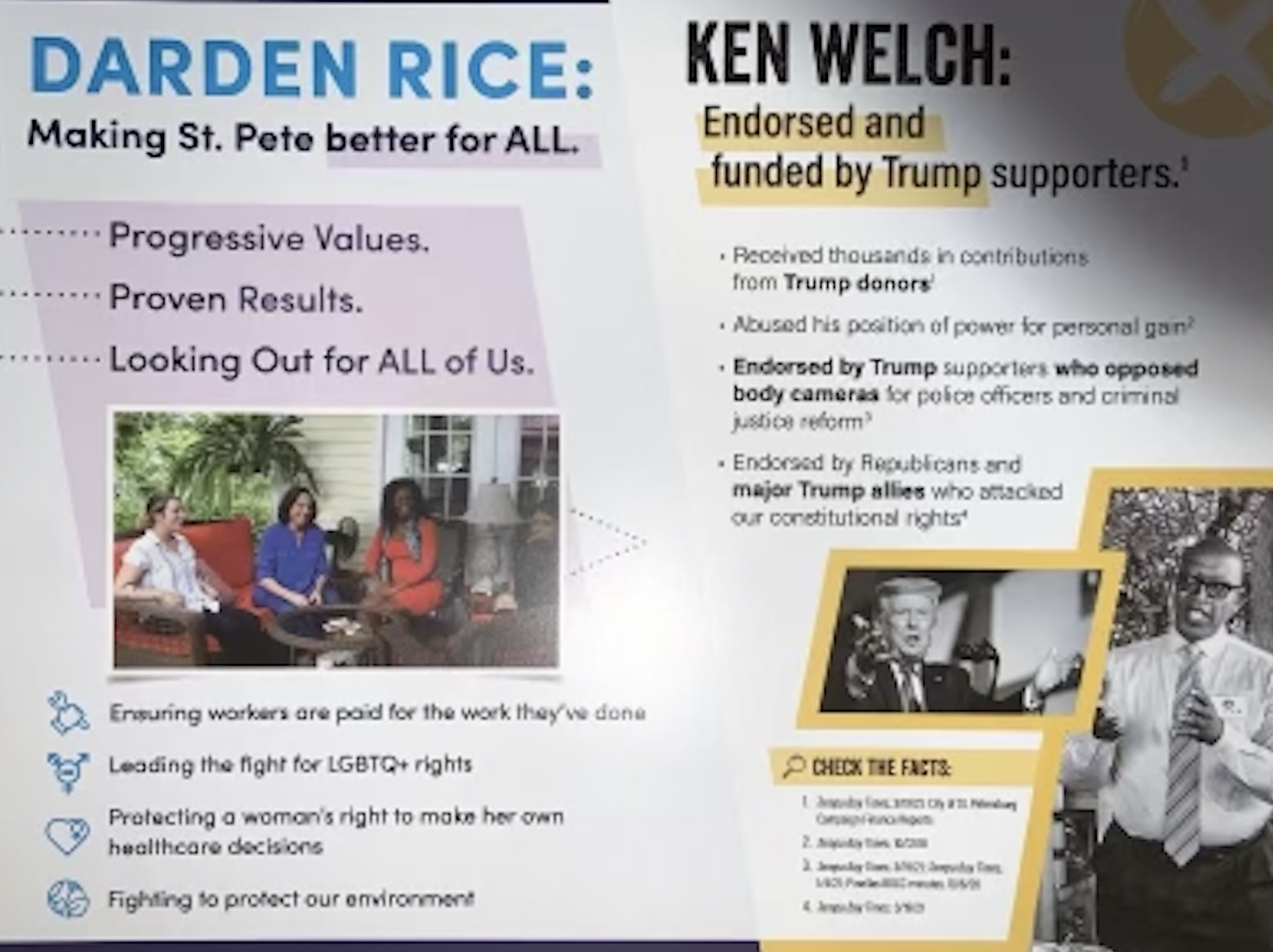 There, the flyer list four digs on Welch — that he received thousands in contributions from Donald Trump donors, received endorsements from Trump donors “who oppose body cameras for police officers and criminal justice reform,” received endorsements from “Republicans and Trump allies who attacked our constitutional rights,” and that he “abused his position of power for personal gain.”

The latter is something Welch probably saw coming. Indeed, he faced criticism in 2018 over claims he was using his position to help his wife, Donna Welch, land a new job. The Rice mailer cites a Tampa Bay Times article from October 2018. There doesn’t appear to be an article listed with that exact date, but Times coverage around that period was extensive related to the firing of Welch’s wife from her position as reading director at the James B. Sanderlin Neighborhood Family Center. In an editorial dated Nov. 8, 2018, the Times’ editorial board lamented “an obvious conflict of interest” after Welch lobbied public officials to hire St. Pete-based R’Club Child Care to take over a reading literacy program. That group offered to hire Welch’s wife.

The other three claims are what drew the ire of Welch supporters. All three could just as easily land on campaign literature criticizing Rice.

None of the claims are patently false. Welch does have Republican backing and his donor list includes conservatives. While Rice hasn’t received any direct endorsements from Republicans, plenty have cut checks to her campaign or political committee.

Further, just two years ago she endorsed City Council member Robert Blackmon, a Republican who is now running against her for Mayor and refused to say in an interview with Florida Politics whether he voted for Trump — either time.

Rice critics took to social media to decry what they perceived as hypocrisy.

Andy Oliver, the pastor at Allendale United Methodist known for his progressive politics, said he was disappointed in Rice.

“She attacks him for being funded by Republican donors and tries to tie him to Trump. Maybe a fair attack, if not for the fact that Rice has received far more Republican money than Welch has (see article below). It is disingenuous to attack someone for doing something you have done as well,” Oliver wrote on Facebook.

He linked to a Florida Politics article citing some of Rice’s conservative donors.

“Even Rice thinks these types of attacks are out of bounds,” Oliver continued. “In October 2019, when the Florida Dems did a similar attack mailer against CM Ed Montanari, tying him to Trump, Rice was one of the first to rally to his support saying the attack was out of bounds. So to levy the exact same attack against her democrat opponent is hypocritical and looks desperate.”

That references the 2019 election in which Montanari, at the time the only Republican on the dais, fielded attacks from a Democratic opponent trying to tie the moderate conservative to Trump. The candidate, Orlando Acosta, was working with Blue Ticket Consulting on his campaign. Blue Ticket is now also working on Rice’s campaign.

Oliver also took issue with the use of a Black woman on the flyer.

“As a White woman, her choosing to use the image of a Black woman on the front of the mailer to make this attack was a really poor decision,” he wrote.

Oliver went on to say he is supporting Welch, but that Rice is his second choice.

“Darden Rice lost any chance she had at my vote over this mailer alone. It’s an incredibly misleading and a pathetic attempt to win at all costs and here the cost is her integrity,” he wrote.

“When I was organizing I regularly worked with Darden on several progressive issues and I don’t know what happened to her over the last few years but something must have seriously changed.  I don’t understand how in the hell she could approve of this BS smear attempt and think her integrity would remain in tact,” he continued.

In yet another reaction, St. Pete businessman Scott Wagman called the mailer a “comical distortion” of Welch.

“The truth is that Ken has a 20 year history of collaboration with constitutional officers and other elected officials that has greatly benefitted the citizens of St. Petersburg. Noted Republicans such as Sheriff Bob Gaultieri, Clerk of Court Ken Burke and others have effectively worked with Ken without devolving into the cesspool of hyper partisan politics,” Wagman wrote.

“Ken Welch is the only candidate for Mayor, in my opinion, who can marshal all of the forces of good in our City and County to lead St. Petersburg into a wonderful future.  He doesn’t need to smear any of his opponents to bolster his chances of election.”

The mailer is a possible precursor of what’s to come in a heated race for an open seat. Incumbent Mayor Rick Kriseman is term-limited out of office next year. He on Monday endorsed Welch, though he didn’t mention the controversial mailer.

Welch is currently polling ahead of Rice, though the race is close. Former City Council member Wengay Newton, and Blackmon, are also polling in the top four.

News: The John F. Kennedy Center for the Performing Arts Announces 120+ Performances for 2021-2022 during its 50th Anniversary Season

Dresden Raceway to commemorate its Black History this Sunday

Grab Him Up, Take Him to the River: Inside a KKK Murder Plot | New York News