Hit hard by the pandemic, one California county looks to vaccinate its most vulnerable

In the early days of the pandemic, Dr. Tien Vo and his staff struggled to keep pace with Covid-19 as it tore through the surrounding community.

Often overshadowed by its larger, more affluent neighbors to the west —  San Diego and Orange Counties — Imperial County had few testing and vaccination resources early on.

Vo, a doctor with two clinics in El Centro and Calexico, a small border city in California, was one of the few providers of Covid-19 tests in those early critical months. It wasn’t until May of last year, after the state identified Imperial County as a “testing desert,” that it opened a site in the region.

“We are the last people to get anything from the state,” Vo said in a January interview. “Even with the pandemic, we were struggling until May or June (of last year), then the state came in.”

Stymied by early shortages in testing and inequities in vaccine distribution, local communities are now forging more targeted efforts to reach the unvaccinated. Here’s how those efforts unfolded in this desert city and the surrounding region.

Bringing vaccines to the border
In March, Vo recalled bringing together a group of volunteers in the brisk pre-dawn hours to help vaccinate farmworkers before they went to work in the fields. In the winter months, these farmworkers grow most of the lettuce, broccoli and other produce eaten across the U.S.

In the parking lot outside of a donut shop, about 300 people began lining up —  more than Vo had expected.

Other nonprofits also mobilized their own efforts at the border. A group of them, called Salud Sin Fronteras (Health Without Borders), banded together to give people who walk across the border access to masks, sanitizer and other supplies.

“They found housing and a more affordable quality of life by living in Mexico, but it’s a journey every day, having to cross the border,” Luis Olmedo, executive director of one of the nonprofits, Comite Civico del Valle, said in a January interview. “They have no protective equipment, no masks and goggles, no handwashing stations, no restrooms… It’s like it’s intended to dehumanize people.”

Before the pandemic, Imperial County had a long history of health inequities. Winds kick up toxic dust from the drying lakebed of the Salton Sea, a large lake once diverted from the Colorado River, now fed by agricultural runoff. It also has the highest poverty rate in the state.

To date, Imperial has the highest mortality rate from Covid-19 in the state of California, with more than twice as many deaths as neighboring Riverside County, and nearly four times as many deaths per capita as San Diego County, according to data from Johns Hopkins.

“The major influencers in our economy and politics have been the agricultural industry,” Olmedo said. “There’s a separation there. A very clear and visible inequity and structural racism that has existed here.”

Before the state changed its allocation of vaccines, Imperial County lagged behind its neighbors. Some weeks, the county of more than 181,000 people would only get one box, a little less than 1,000 doses.

The state’s initial allocation of doses was based on the number of eligible residents, starting with healthcare workers, and later, people over age 65. But that methodology didn’t factor in other essential workers, such as farmworkers in Imperial and Riverside Counties. It also favored places like San Diego County, which has a bigger proportion of healthcare workers.

And in places like Imperial County, where the population skews a bit younger, with a median age of 32, that also meant less doses.

“We couldn’t even keep up with our essential workers, we’re talking about EMTs, firefighters… medical personnel. We weren’t even denting them, let alone the rest of the population,” said Jesus Escobar, a member of the Imperial County Board of Supervisors. “It was a challenge for the first six to eight weeks.”

The state shifted gears in early March by setting aside 40% of doses for communities in the lowest quartile of the California Healthy Places Index, a measure that includes economic, social, education, housing and transportation conditions.

“We were just waiting for the vaccine and administering it within days,” she said. “So it made a huge difference.”

As of early June, roughly 41% of the county’s total population was fully vaccinated, according to CDC data.

Where are the vaccines?

ZIP codes with wealthier and older residents in Southern California still lead in vaccination rates. For example, in La Jolla (92037), more than three-quarters of eligible residents are fully vaccinated. But there were some exceptions. Border communities in San Ysidro (92173) and Calexico (92231) are catching up on vaccination rates.
Regions are shaded based on the percentage of the population in each ZIP code with one or more doses of vaccine as of June 2.

In Riverside County, agricultural communities south of Palm Springs, such as Mecca, Oasis and Coachella, had some of the highest positivity rates, but didn’t have as big of testing shortfalls as other communities.

Kevin Meconis, an epidemiologist with the Riverside County Department of Public Health, said the county made a targeted effort to work with local groups in the Coachella Valley early on to ensure people had access to testing, and later, vaccines. But these communities still saw more Covid-19 cases due to the risks posed by their work, coupled with crowded living conditions.

“The essential worker element of it can’t be discounted,” he said in a phone interview.

Now, Meconis said the county is working with areas further west in the Moreno Valley, such as Perris, and parts of Riverside and Corona, to ensure people have access to vaccines.

“Those are the main areas of high need that have lower vaccination rates,” he said.

Border communities are catching up on vaccines, according to state data. At the site of the San Ysidro border crossing, one of the largest between San Diego and Tijuana, 87% of eligible people in ZIP code 92173 were fully vaccinated as of June 1. And in Calexico, ZIP code 92231, 71% are fully vaccinated. 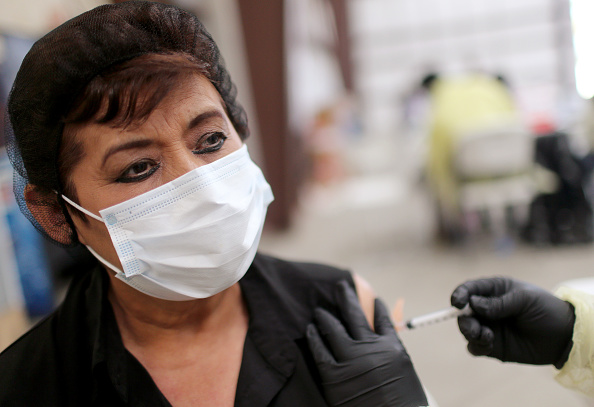 Guadalupe Aguirre receives a dose of the Johnson & Johnson Covid-19 vaccine at a clinic for agriculture workers on April 5, 2021 organized by TODEC Legal Center in Riverside, Calif. The county made farmworkers eligible for vaccines in January, alongside teachers and seniors, as they face an increased risk of contracting Covid-19. (Photo credit: Mario Tama, Getty Images)

Wealthier communities were ahead — sometimes
In some cases, places that had the most access to testing last year also had the most access to vaccines, according to an analysis of testing data by MedCity News. For example, two wealthy ZIP codes encompassing La Jolla and Sorrento Valley in San Diego County had some of the highest levels of per-capita testing rates between August and December. They also had high vaccination rates; 78% of eligible residents in ZIP code 92037 are fully vaccinated, and 85% of residents for ZIP code 92121.

That said, not all high-income cities had high vaccination rates. For example, ZIP code 92592, encompassing Temecula and part of Southern California’s wine country, had the biggest testing shortfall in the county, and just over a third of its residents are fully vaccinated.

It’s also important to note that ZIP codes don’t give as detailed of a picture of what’s happening in individual neighborhoods and towns, and a portion of tests for each county, particularly negative tests, did not include location data.

Given that some testing sites were later converted to be used for vaccines, the overlap is not necessarily a surprise. The U.S. has also relied heavily on pharmacies, mass testing and mass vaccination sites in its pandemic strategy.

“When you look at it from a 30,000 foot view you see similar patterns. Wealthier, whiter communities ended up getting access to testing sites earlier. The same thing happened with vaccination sites,” said Dr. Jorge Caballero, an anesthesiology instructor at Stanford, who launched a volunteer effort early in the pandemic to map out Covid-19 testing sites. “But they were also fundamentally different in that with the vaccination rollout, policies around vaccinations also factored in eligibility for vaccination a lot more than did the testing site rollout.”

Statewide, there are still significant inequities in who has gotten vaccinated. While 39% of California’s population is Latino, just 27% of the total vaccines administered went to people of Latino or Hispanic ethnicity, according to state data.

Digging out
Going forward, community-level efforts, not mass vaccination sites, will play an outsized role in helping bridge the gap.

“You have to go from a passive, ‘here are the vaccine centers and please come get your vaccine,’ to more active outreach,” said Dr. Chris Beyrer, a professor of public health and human rights at Johns Hopkins. “You really have to get to that granular outreach and access. It still seems like there were plenty of people who were willing to get immunized if it were convenient and available.”

That involves less of a focus on big hospitals and medical centers, and more local health centers, farmer’s markets and other non-clinical settings. It should involve less email registrations, and more phone calls or walk-up appointments.

Future policy should not just consider meeting people physically where they are, but also the social aspects of the pandemic, Caballero added. For example, making sure people can take time off work if they experience side effects after getting vaccinated.

“We dug ourselves a deep hole,” he said. “It took a while to realize that just opening access to everyone is not enough.”

Survey data from the Kaiser Family Foundation in April found that a significant number of unvaccinated adults reported worries about missing work due to vaccine side effects, including nearly two-thirds of unvaccinated Hispanic adults and more than half of unvaccinated Black adults.

Imperial County Public Health’s Angulo said the county is shifting from larger drive-thru events to smaller indoor clinics, as the scorching hot summer months quickly approach. They’ve been sending out mobile teams to workplaces, museums, and the fields, though the farming season is slowing down.

Meanwhile, Vo continues to drive to more remote parts of the county, schools, and apartment buildings, to find people who still need a dose. Like many parts of the U.S., he faces a new challenge: There are enough vaccines, but fewer people lining up to get them.

“Last year, this time, how many people died? What changed? It’s the vaccines,” he said in a recent interview. “This year, we look much better. I’m very confident because I got vaccinated.”

Elise Reuter reported this story while participating in the USC Annenberg Center for Health Journalism’s 2020 Data Fellowship.
The Center for Health Journalism supports journalists as they investigate health challenges and solutions in their communities. Its online community hosts an interdisciplinary conversation about community health, social determinants, child and family well-being and journalism.

Why It Feels So Good to Do Simple Things Again

The Seattle Storm Is the Most Political Team in Sports