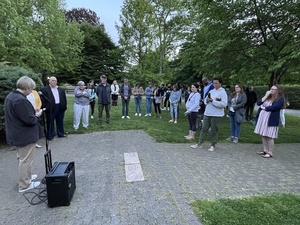 Community organization Ridgefield Allies has intensified its activities of late, rolling out a new logo, expanding its board of directors, and preparing a slate of new initiatives.

Allies was organized in late spring 2020 by concerned local residents in the aftermath of the killings of Breonna Taylor, Ahmaud Arbrey, George Floyd, and others. As a commitment to act in solidarity with, and advance the struggle for, racial justice, Allies conducted two well-attended local streaming educational events in summer 2020 (view here and here), sponsored a book club, co-hosted the Ridgefield Playhouse Diversity Film Series in the fall, and produced and published a children’s book reading video.

The Ridgefield Board of Selectmen voted to confer Friends of Ridgefield non-profit status to the organization. Over the winter, however, the organization was diverted from creating/distributing new programing by safety and security concerns.

The organization’s website was subjected to unrelenting brute-force attacks until the organization implemented more sophisticated security protocols to proactively abort such attacks. Allies’ social media page was also plagued by harassing comments from local antagonists. Finally, over that same period, a local letter-writing and “whisper” campaign attempted to disparage the organization and members of its board of directors.

Though distressing, these incidents were aberrations, and organizers have overwhelmingly received praise and encouragement for Allies’ efforts and commitment to its mission. Inspired by positive feedback to persevere, Allies has in recent months initiated new activities.

Completing an effort initiated last summer, Ridgefield Allies has rolled out its new organization logo, custom designed by the local RPAC Art Center and Academy’s students as part of a curriculum exercise. Ridgefield Allies are extremely grateful to RPAC Art Center and Academy for creating our logo. Greg Mursko and his student designers offered us several amazing choices that made it difficult to choose just one. Allies are thrilled with the final choice, which board members felt effectively and simply symbolizes and communicates the holistic continuum of human justice.

In observance of June as African-American Music Appreciation Month and World Music Day on June 21, Ridgefield Allies is celebrating the intersection of music and activism. Visit Allies website each day of June as see each new entry in the month-long Songs of Struggle playlist and an explanation of that song’s importance in the struggle for social justice.

Allies believes that the learning and sharing of Black history should not be confined to the 28 days of Black History Month each year. Consequently, in late February 2021, the organization debuted a new feature on the Allies website to showcase more generally the achievements, experiences, and struggles of disadvantaged people in our history.

These facts, stories and lessons have been glossed over or overlooked entirely in popular accounts and are largely unknown to many Americans. In an attempt to address these omissions, Ridgefield Allies has committed itself to publishing a daily digest highlighting events that occurred on each day in history. These daily digest accounts help showcase outstanding but overlooked individuals, institutions, or inventions, highlight forgotten tragedies and injustices. They also succinctly explain widely-heard-of but little understood incidents.

The daily-updated feature typically includes two to four short entries, all of which can be read in less than 5 minutes, with links to more in-depth, authoritative resources or articles. The daily Today in Hidden History feature appears on the Allies website homepage, and the full list of all entries for all dates published so far can be found under the Hidden History tab. After just 3 months, Allies has already amassed nearly 300 Hidden History entries. Allies posts brief synopses of each day’s Hidden History entries to its Facebook, Twitter, and Instagram pages, to alert people to each day’s publication.

On May 25th Ridgefield Allies conducted a twilight vigil in Ballard Park to mark the one-year anniversary of George Floyd’s death. The vigil featured a recitation of names of lives lost to injustice, a moment of silence, hymns, and testimonials. Highlights were Ridgefield Chorale Music Director Daniela Sikora leading the participants in “Amazing Grace”, and ACT of Connecticut co-founder and Music Supervisor Bryan Perri singing “How Can I Keep From Singing”. Click here to view video of the vigil.

Ridgefield Allies also have a slew of new programming planned for the near future. Allies will partner with the Ridgefield Playhouse to co-host the return of last year’s highly successful Diversity Film Festival, with an expanded curated series. Allies board has also begun planning a series of public – either in-person or streaming — events and programming for the remainder of the year, including a new book club this fall, programming to commemorate Juneteenth, promotion of art, music, and poetry by creators of color, as well as specific outreach to help our community to learn about, elevate, and act on the continuing struggle for justice throughout society. Look for announcements as Allies launches each new program in the near future.

Over the quiet winter months, Allies expanded and diversified its board of directors to reach more broadly and deeply into the local community and to increase the variety of talents and perspectives. The five current board members are:

Ridgefield Allies thanks the many members of our lovely community for the encouragement and participation they have bestowed on the organization over the past year. Allies invites broader community involvement with Ridgefield Allies by volunteering or contributing to help continue and expand Allies’ programming and educational efforts.

Why Leelanau County ranks No. 1 in Michigan vaccination rates

Why Leelanau County ranks No. 1 in Michigan vaccination rates

Why we need a Juneteenth holiday | Black Lives Matter