Analysis: Where is nursing on its journey towards race equality?

in Current Black History
Reading Time: 7min read
A A

Nursing has started on a journey towards race equality but progress must accelerate to prevent nurses quitting their jobs in droves post pandemic, the profession’s diversity leaders have warned.

In the second of what will now become an annual ‘stocktake’ of how the health and care system is faring on equality, diversity and inclusion, Nursing Times spoke to three of the subject’s leading voices. They said, with the work that has begun, there was a “huge opportunity to transform nursing in every way”, but it would require organisations to follow up their warm words with actions.

“We have a duty of care to our members of staff as well, because those microaggressions have physical consequences”

Failure on this agenda could mean the NHS ending up with more nurse vacancies than it had before Covid-19, warned Yvonne Coghill, a nurse and former director of the NHS Workforce Race Equality Standard (WRES) programme. She said nurses she had spoken to from Black and minority ethnic backgrounds were “ready to go” after a gruelling 18 months when many had been in patient-facing roles. “They’re tired and fed up and looking at their watch for their 55th birthday to actually retire and go and do something else. They don’t want to do it anymore,” said Ms Coghill.

Compared with last year when Ms Coghill spoke to Nursing Times, she said senior leaders were now “really beginning to get that this is important”. However, they were also realising that race inequality was a “really deep and complex and difficult societal issue” that was not easy to fix.

While she was seeing steps in the right direction, Ms Coghill said there had, at times, been “mixed messages” that placed a question mark over the UK’s commitment to the agenda. She cited the heavily criticised government-commissioned report on race and ethnic disparities released in March, which appeared to downplay the issue of racism in this country. She likened the “dichotomy” over the equality agenda to ministers clapping on their doorsteps for nurses, and then proposing a pay rise of just 1%.

She also continued to hear stories of nurses’ experiences on the front line that showed there remained a long way to go. One nurse, who has an Afro, had contacted Ms Coghill recently to ask for advice after she was asked by her line manager what was “wrong” with her hair, because it looked like she had been “gang raped and pulled through a bush backwards”. When the nurse reported the incident, she was told the comments could not be discriminatory because the line manager was from a minority ethnic background, and was subsequently asked if she could find a way to pull her hair back into a ponytail, noted Ms Coghill.

Going forward, she said, a true zero-tolerance approach was also needed toward discrimination from patients. She was concerned that “bad behaviour” had gone unchallenged for so long that it had now become “embedded”, noting how when a patient refused treatment from a Black nurse, the hospital would usually respond by sending a White nurse in their place, citing a duty of care to the patient. “Actually, we have a duty of care to our members of staff as well, because those microaggressions have physical consequences on people’s health,” stated Ms Coghill. But, she said, there had been some positives in the last year, including the launch of the NHS Race and Health Observatory, which is working to identify and tackle inequalities in health and care, and to which she is a special adviser.

One of the key issues consistently highlighted by the WRES was around the career progression difficulties faced by Black and minority ethnic nurses in the NHS, who are overrepresented in the lower bands and underrepresented at more senior levels. Ms Coghill said the situation was still “not as good as it could be” but there was “hope”. In 2020, there were 12 executive directors of nursing from a minority ethnic background across the 222 NHS trusts in England, up from eight in 2018 and 10 in 2019. She noted the recent appointment of Sue Tranka as the next chief nursing officer (CNO) for Wales was “really positive” and, overall, suggested “things are going in the right direction” but slowly. “We are on a journey… but it’s going to take much longer than a year,” she added.

Likewise, Wendy Irwin, equalities lead for the Royal College of Nursing, said the race equality agenda in nursing was “really just properly getting going now”. With the coronavirus pandemic, she said, there was now a lot more awareness around issues such as racism but “we are still very much searching for the solutions as to how we tackle this”.

For real change, she said organisations needed to focus less on “gestures” and more on “the practical activity to change outcomes” – and not only at times such as Black History Month or Pride Month. “I’ve seen lots of organisations take the knee, tweet about Pride but actually, when I look at the outcomes for trans patients, for example, they are still awful. When I look at maternal health risks for certain communities, they are still awful,” said Ms Irwin.

She believed accountability and “meaningful metrics” were needed to track progress beyond measuring the frequency of harm and looking at the wider picture of what inclusion should look and feel like, including “being able to go to work as your full, authentic self ”.

In addition, she said it was “absolutely critical” going forward that nursing at all levels was representative of the wider population. The current system often relied on people benefitting from “good tailwinds” to get jobs and “little gusts of privilege that connect you to the next person or to better networks”. Ms Irwin said there potentially needed to be a “radical” shake-up of recruitment and selection processes in nursing. “How do we allocate people to roles? And does the way we do it now, is it so imbued with bias that we can’t see?” she asked.

This moment presented a “huge opportunity to transform nursing in every way in every kind of level – or not”, she said. “The choice becomes then whether or not actually we are savvy enough to seize this opportunity to say that what we had before may have worked for some, but it didn’t work well enough for everybody.” Ms Irwin added that nursing “at its heart… is about transformation and social justice”. “I don’t think we should be frightened of using those words,” she said.

As the strategic lead for the North East and Yorkshire, Annie Topping – also executive director of nursing, quality and patient safety at NHS Northumberland Clinical Commissioning Group – is helping CNO for England Ruth May with her action plan to improve experiences and prospects for minority ethnic nurses. Analysing the current state of play, Ms Topping said the pandemic had “brought inequalities to the forefront”. “I think sometimes incredible disruption like that can really create a momentum for change, and I think that is where we are,” she noted.

One of her remits on the CNO team is international recruitment and how overseas nurses coming to the NHS can be supported so they want to stay in their jobs. Ms Topping started her career in the NHS after moving to the UK from Hong Kong in the 1980s. Her journey to where she is now has taken her through 18 jobs in 11 healthcare systems across England. She said opportunities had not often come to her door so, “rather than waiting for people to recognise me as a talent”, her belief in herself meant she went for jobs wherever they came up.

Even now, Ms Topping is believed to be the only nurse from a South Asian or South-East Asian background working at executive board level in the NHS. There remain no health service directors of nursing from the Philippines, despite Filipino nurses making up the largest international group on the Nursing and Midwifery Council register. Ms Topping noted how a recent job opportunity for a deputy director of nursing post in her region had attracted no applications from nurses from minority ethnic backgrounds. 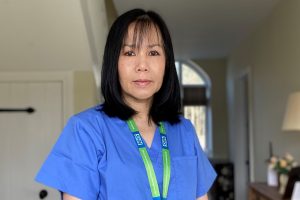 Ms Topping said one of the things she found “difficult” when climbing the ladder was that, while she had mentoring opportunities, she “definitely didn’t have anyone who looked like me and sounded like me”. In terms of overseas nurses now and the reasons they give for leaving their jobs, she said she could “relate to a lot of them”.

For her, it was important that employers took steps to recognise such nurses with career aspirations and put in place targeted support to help “nurture” and coach them to progress. Through the CNO work, there were plans for a mentoring programme linking nurses from minority backgrounds, she highlighted.

Ms Topping welcomed that there was now a “clear policy intent” to address workforce inequalities nationally, but said she wanted to see “specific milestones” for nursing and midwifery as the largest collective group in the workforce. While stressing that progress was not just a “numbers game”, she warned that, without measures and targets, there was a risk of other priorities taking over. “I think it is so great now that we have the spotlight on workforce inequality,” she said. “There’s a big intention and ambition to do something different. But I think, within that kind of agenda, we need something specifically for nurses and midwives to make sure policy intention will translate to real actions to make a difference.” 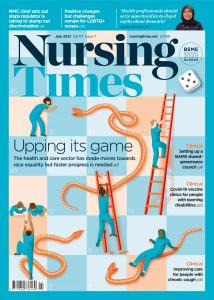 This article featured as the cover story in the July 2021 print edition of Nursing Times, which carried a theme of diversity, equality and inclusion in nursing.

Cuba’s Moment of Reckoning Has Been a Long Time Coming

The assault on voting rights is unending