in Black Politics
Reading Time: 6min read
A A

Updated at 5 p.m. with Biden comments in Tulsa

WASHINGTON – Two days after Texas Democrats’ dramatic walkout to stymie a bill they view as voter suppression, President Joe Biden called Tuesday for a “month of action” to safeguard voting rights, using the 100th anniversary of the Tulsa race massacre to condemn a nationwide GOP effort to undermine equality at the ballot box.

“This sacred right is under assault… with an intensity and aggressiveness we have not seen in a long, long time,” Biden said. “It is simply un-American. It’s not, however, sadly, unprecedented.”

Biden didn’t call out Gov. Greg Abbott and Texas Republicans in Tulsa, as he had Saturday when passage of the divisive bill seemed imminent. But aides made clear that the uproar south of the Red River was on his mind.

Biden also said he has designated Vice President Kamala Harris as the administration’s point person on two controversial proposals in Congress – to restore federal scrutiny of elections in states with a history of discrimination, and to set national standards that would make the fight in Texas moot.

Outnumbered Democrats in Austin and other state capitals have pleaded for such federal protections to avert Jim Crow 2.0, referring to a notorious era of discriminatory laws.

GOP lawmakers around the country, goaded by former president Donald Trump, have pushed hundreds of bills since his 2020 defeat in the name of “election integrity” – cutting absentee ballot options, rolling back early voting, and ramping up purges of voter registration lists, for instance. The fight in Texas is over Senate Bill 7, widely seen as one of the most aggressive.

Abbott has vowed to reconvene lawmakers for a special session sometime this summer to try again. Texas Democrats – having used their most potent tool Sunday night by staging only the fourth walkout in the history of the Texas House – have increasingly pinned hopes on Congress stepping in to overrule state-level restrictions.

Biden alluded to Trump’s false claims about a stolen election, which have fueled the nationwide push for so-called “election integrity” laws.

“In 2020 we saw a tireless assault on the right to vote,” the president said. Yet “more Americans voted in the last election in the midst of a pandemic than in any election in American history…. The rule of law held. Democracy prevailed.”

Trump continues to claim, without evidence, that his reelection was stolen through massive fraud in several states, including expansion of mail-in voting meant to make balloting safer during the COVID-19 pandemic that he and some allies claim was unconstitutional. The Supreme Court and many lower courts rejected all such assertions.

SB7 would abolish drive-through voting, which Harris County in particular expanded last fall as a response to the pandemic. It would cut hours for early voting, end Sunday voting, and cut back on early and late voting likely to help shift workers who tend to support Democrats. It would expose elections clerks to criminal penalties for providing too much help.

And it would give partisan poll watchers much more latitude – inviting voter intimidation, according to Democrats and minority advocates.

Another provision would make it easier to overturn an election, eliminating a requirement to prove there were enough fraudulent ballots to have affected the outcome. With a far lower threshold– a showing there was some fraud, even if it wasn’t widespread – the sorts of challenges Trump tried to mount around the country last fall could have gained traction, instead of being laughed out of court by dozens of judges.

Trump won Texas, and there were no claims of widespread or systematic fraud there. Even so, Abbott identified election integrity as a top priority for the legislative session that ended Monday.

“The Texas legislation is part of a concerted attack on our democracy being advanced in statehouses across the country, on the basis of the same repeatedly disproven lies that led to the assault on our nation’s Capitol on January 6,” White House spokeswoman Karine Jean-Pierre told reporters aboard Air Force One en route to Oklahoma, where Biden became the first president to commemorate a two-day rampage by a white mob in 1921 that left hundreds of Black people dead.

But in the 50-50 U.S. Senate, Democrats need 10 Republicans willing to help them break a filibuster.

On March 3, the U.S. House approved HR 1, the “For the People Act” without a single Republican vote.

The bill would end partisan gerrymandering and set standards for early voting, vote-by-mail and automatic voter registration that would nullify restrictions in many Republican-led states. It also would create mandates for public campaign financing and disclosure of “dark money.”

With Republicans denouncing that as a power grab, the bill is stalled in the Senate.

But as Biden grumbled in Tulsa, two Democratic senators – Joe Manchin of West Virginia and Kyrsten Sinema of Arizona – have broken ranks and hobbled such efforts.

Democrats have also pinned their hopes on the John R. Lewis Voting Rights Act, named for the late congressman and civil rights era icon. The House approved the bill in 2019 but it died in the GOP-controlled Senate. Democrats control the Senate now but it would still fall to a filibuster, and has not been reintroduced.

That bill would restore Justice Department scrutiny of election rules in Texas and other states. The Supreme Court ended such oversight in 2013, ruling that a decades-old formulas for deciding which jurisdictions deserved such oversight had become outdated.

With such measures stymied by filibuster or the threat of one, progressives have been agitating for Senate Democrats to eliminate the arcane tradition. Senators in both parties have balked, as has Biden.

Minority voter advocates are pressing on all fronts, demanding action from the White House, Congress corporations whose leverage could persuade some lawmakers to relent.

He noted the coordinated effort by Republicans in nearly every state capital, making a federal response essential.

“We can’t just fight this in Georgia and then hop over to Florida and then Texas,” he said. “If these Democratic legislators in a minority [in Austin] could stand tall and be brave and get this kind of victory, you can’t tell me that those who have a majority in the US Senate can’t at least show that amount of unity.”

Beto O’Rourke the former El Paso congressman who came close to toppling Sen. Ted Cruz in 2018, is launching a 22-city tour to rally opposition to the bill that Democrats view as Jim Crow 2.0, a barnstorming swing that could double as a test run for a potential challenge to Abbott, with voting rights as a central issue.

Stacy Abrams, the former Georgia nominee for governor and a leading Democratic voice on voting rights, has worked with O’Rourke to drum up awareness. 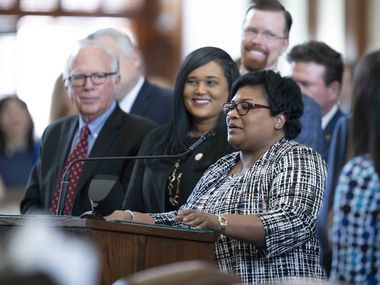 Hours after the Democrats’ walkout, Abbott declared that he will veto funding for the Legislature to pressure lawmakers to accede to his wishes, though it’s unclear how that would work.

The new budget doesn’t take effect until Sept. 1 and it has no line items for “Democrats” and “Republicans.” So Abbott would be inflicting pain on allies as well as adversaries, along with their staff and nonpartisan employees from budget analysts to janitors.

“No pay for those who abandon their responsibilities,” he tweeted.

Texas pays state lawmakers $600 a month plus $221 for every day in either a regular or special session.